An Upcoming Biological Tool and Alternative to Commercial Dewormers

Find this article at:
go.ncsu.edu/readext?448349
— Written By JM Luginbuhl

A nematode-trapping microfungus, Duddingtonia flagrans has been shown to survive and maintain its viability while passaging through the gastro-intestinal tract of livestock. The fungus then germinates and spreads rapidly on freshly deposited fecal pellets by producing specialized structures that trap barber pole and other nematode larvae when they emerge from the feces. Once the larvae are trapped, they are unable to migrate out of the fecal mass and up to grass blades to be consumed by the grazing animal. The larvae are eventually killed through digestion by specialized enzymes produced by the fungus. Studies have shown that the fungus trapping structures developed in the 50 to 95 F temperature range. 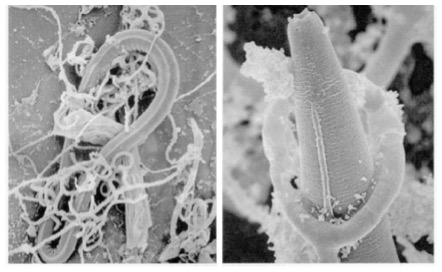 Thus, this fungus has the potential to break the life cycle of nematode parasites by capturing infective larvae before they migrate from dung to pasture, where they would otherwise be ingested by grazing animals.

The main goal of using D. flagrans is for long term reduction of pasture contamination. The fungus has no anthelmintic effect on adult gastrointestinal tract nematodes in the animal.

The company that had initially developed and promoted the product, Hansen Biosystems from Denmark, terminated production some years back. International Animal Health, however, an Australian company, continued to pursue studies in efforts to re-establish D. flagrans as a viable commercial product. After years of refining the process, their new product has been tested under laboratory and field conditions. The results have shown excellent control in reducing gastrointestinal tract nematode larvae in feces and pastures.

The D. flagrans product has been approved by the Food and Drug Administration/US Department of Agriculture/Environmental Protection Agency and should be available commercially in the 1st quarter of 2018.

International Animal Health has developed protocols for on-farm use. The product will come in packets to be mixed with a supplemental feed.